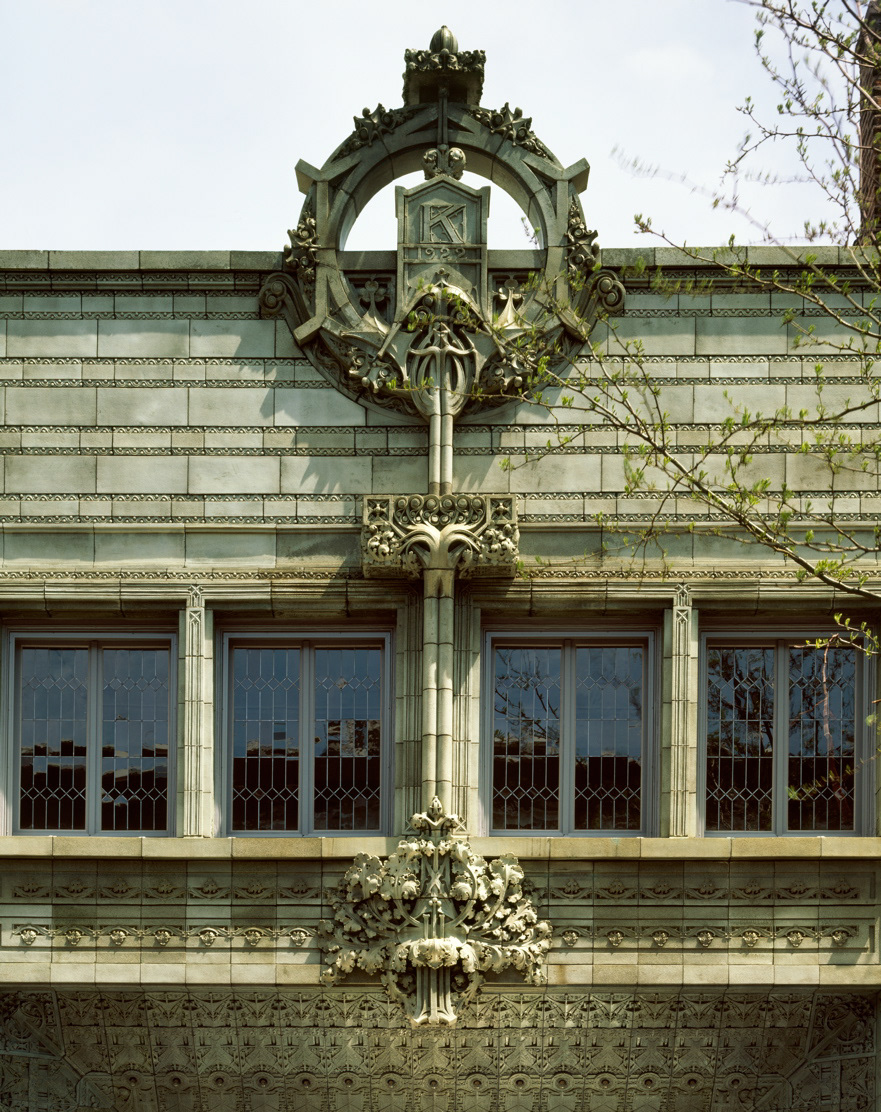 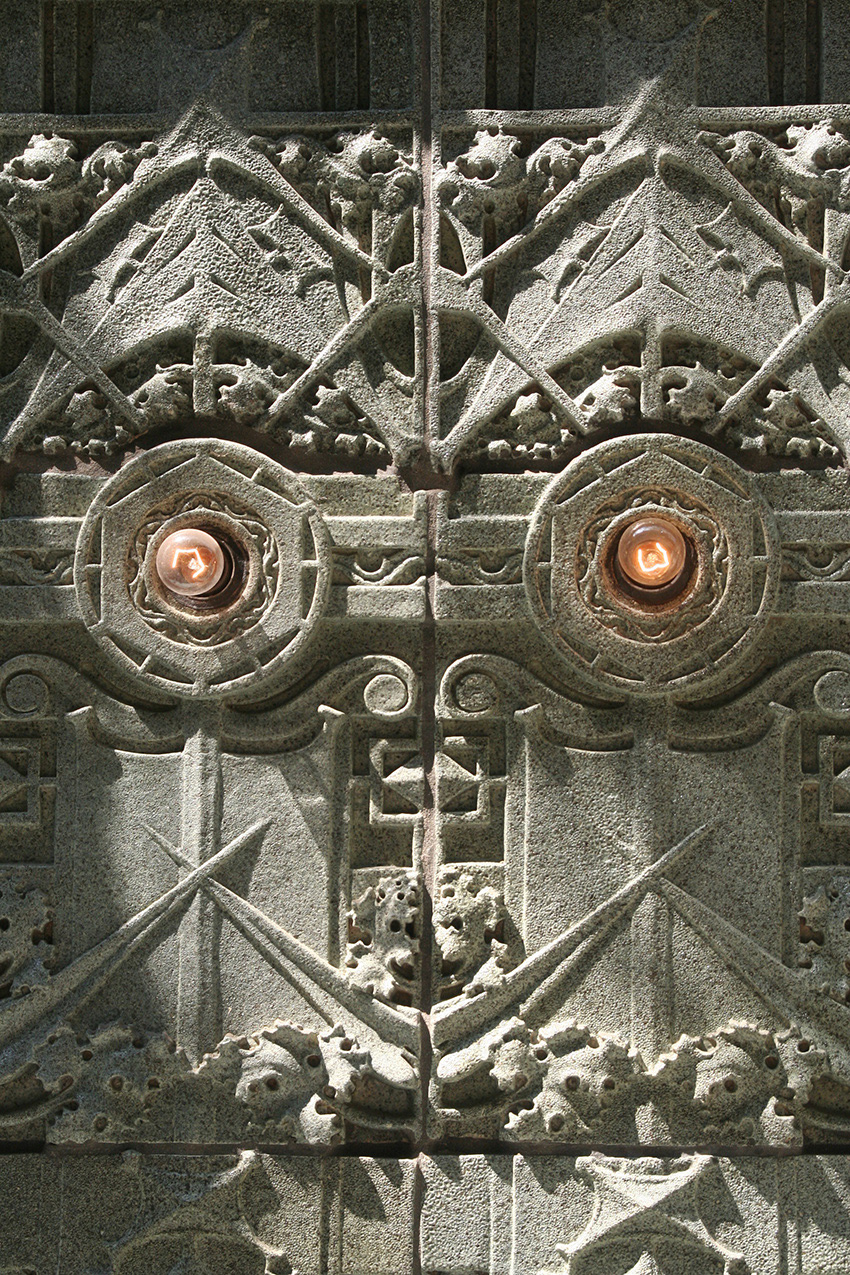 History
Home to Studio V Design, the Krause Music Store is architecturally and historically significant because it is the last of the 126 buildings designed by Louis Sullivan, considered one of the greatest architects of the Chicago School of Architecture. In coining the phrase “form follows function”, Sullivan believed that the function of a building gave rise to its form and that the two should work in concert with each other to be beautiful.
With its curvilinear plant forms and intricate framing of the picture window, the Chicago-landmark facade of our building is an outgrowth of Sullivan’s belief in organic architecture.
The Krause Music store was commissioned in 1921 by William P. Krause to serve the dual purpose of a residence and a music shop, at a total cost of $22,000. Krause chose his neighbor, architect William Presto to design the building. Years earlier, Presto had worked as a draftsman for Louis Sullivan. But by 1921, Sullivan’s success had faded as his designs were no longer in demand. So in a reversal of roles, Sullivan was asked by his former employee to design what would become the building’s beautiful green terra cotta façade. Sullivan, in ill health, living in a rented room and hopelessly insolvent, accepted the offer.
Showcasing his genius with terra cotta, Sullivan designed the entire façade with ornamentation richly detailed in geometric and curvilinear forms of nature. The material for the facade was furnished by the American Terra Cotta company for $3,770.
The building was completed in 1922. The store opened to sell pianos and sheet music, and was a pioneering retailer for the introduction of the radio. Tragically, with the onset of the Great Depression, William Krause committed suicide in the family’s apartment on the second floor. His widow rented and eventually sold the building to a funeral parlor. During the next 60 years, the building functioned as a funeral home, undergoing much neglect and alteration. The terra cotta façade was acid washed, which ultimately damaged and lightened its color. The basement was converted into a workspace for embalming the dead.
On September 20, 1977, the City of Chicago recognized the historic significance of the building and designated the façade as a Chicago Landmark. Thirteen years later, Scott Elliott opened Klemscott Galleries and restored the front of the building to its original intent. By the turn of the new century, a gift shop called The Museum of Decorative Arts occupied the space.
In May 2005, the building was purchased by Pooja and Peter Vukosavich, who painstakingly restored the historic Sullivan façade and completed a modern renovation of the main floor for their company offices, Studio V Design – a marketing communications and design agency. The building is now a serene and elegant space with a meditative “zen” garden, fostering a dynamic environment for creative design. The renovation has won several awards and has attracted media publicity. More than 15 feature stories have been written about the building, including features on NPR, PBS, and in Architectural Record. In 2006, the building was placed on the National Register of Historic Places. 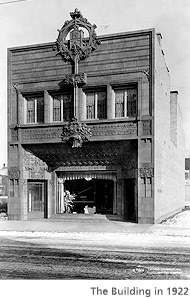 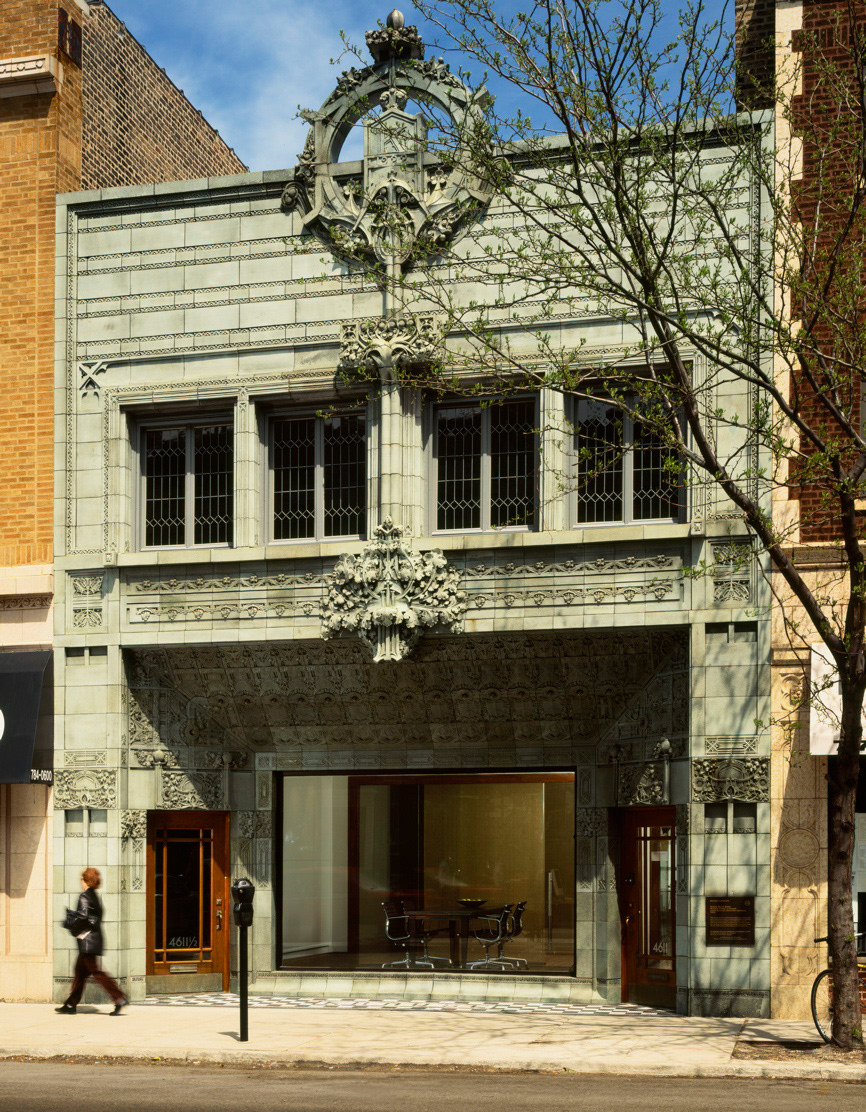 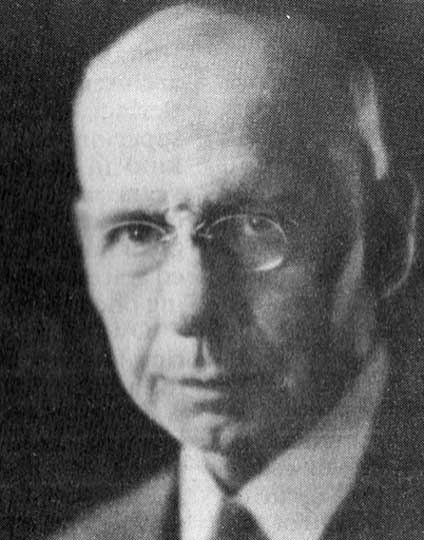 Louis Sullivan
The "Father of Modernism"
Considered by many as the creator of the modern skyscraper, Louis Sullivan was a pioneer of modern architecture and the inspiration to architects of the Prairie School. As a founder of the "Chicago School" of architecture, Sullivan achieved fame early on in his career for brilliant designs in steel-frame construction, which led to the emergence of the first skyscraper. His most famous former draftsman, Frank Lloyd Wright, often referred to Sullivan as his mentor and “Lieber Meister,” or beloved master.
Sullivan forged a new path in architecture. He was famously skilled at integrating function, architecture and ornamentation into his designs. Sullivan abandoned the imagery of the past and — with the help of new construction techniques — formulated a new visual language. This language came to be known as The Chicago School and Louis Sullivan was at the vanguard. He successfully pulled together ideas that had been developed independently and created a new philosophy and a new art of building. It was a positive, modernist movement that spoke of progress and influenced architecture for decades to come.
The Chicago School created the first skyscrapers, with Sullivan giving the buildings strong, soaring vertical lines. Yet it was Sullivan’s love of decorative elements inspired by nature that gave these buildings their unique character.
His philosophy of “Form follows Function” can be seen on many buildings he designed, including:
Auditorium Building, Chicago (1889)
Wainright Building, St. Louis (1890)
Chicago Stock Exchange Building (1893)
Guaranty (now Prudential) Building, Buffalo (1894)
The Bayard-Condict Building, New York (1898)
Carson, Pirie, Scott store, Chicago (1899)
Our building – the Krause Music Store – was Sullivan’s last work at the age of 65 (1921-22). Two years later, he died penniless and nearly forgotten. 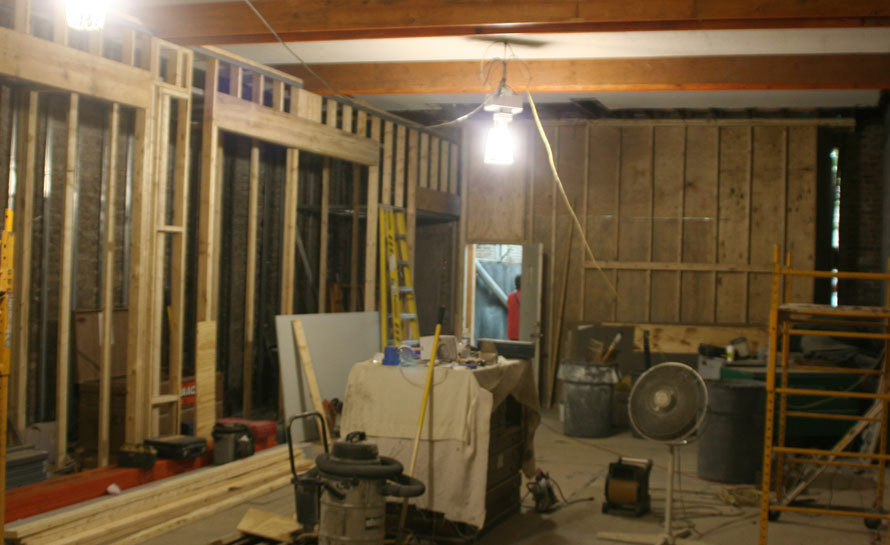 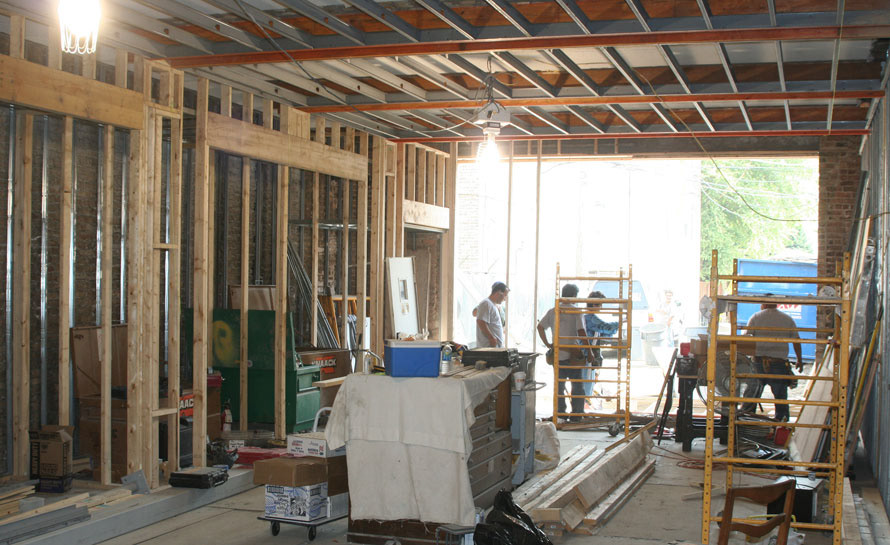 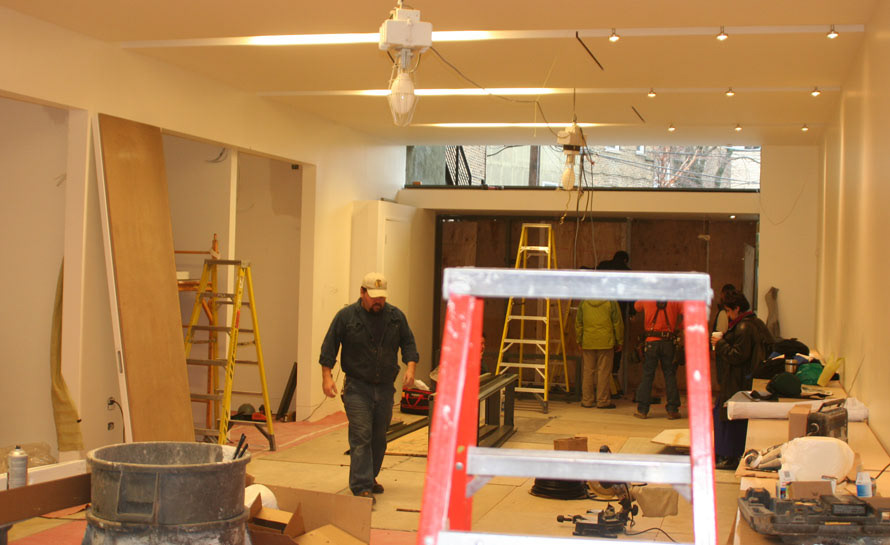 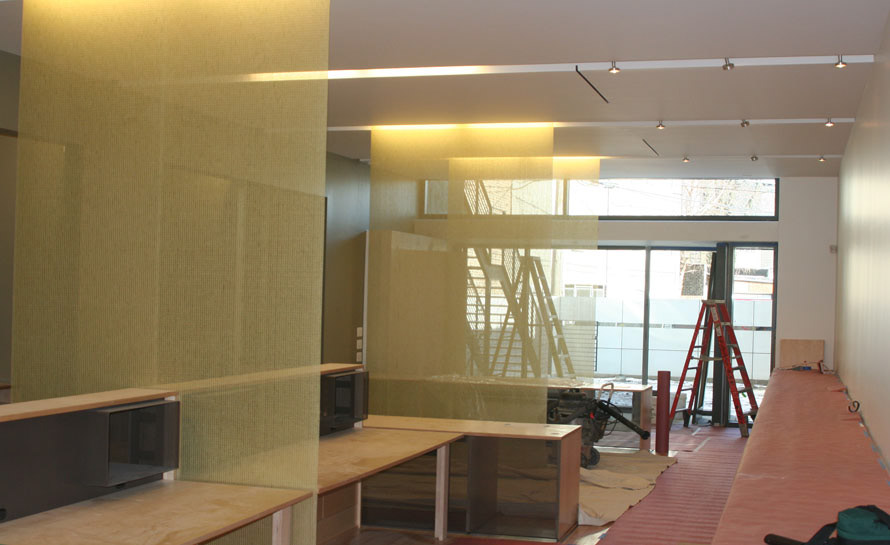 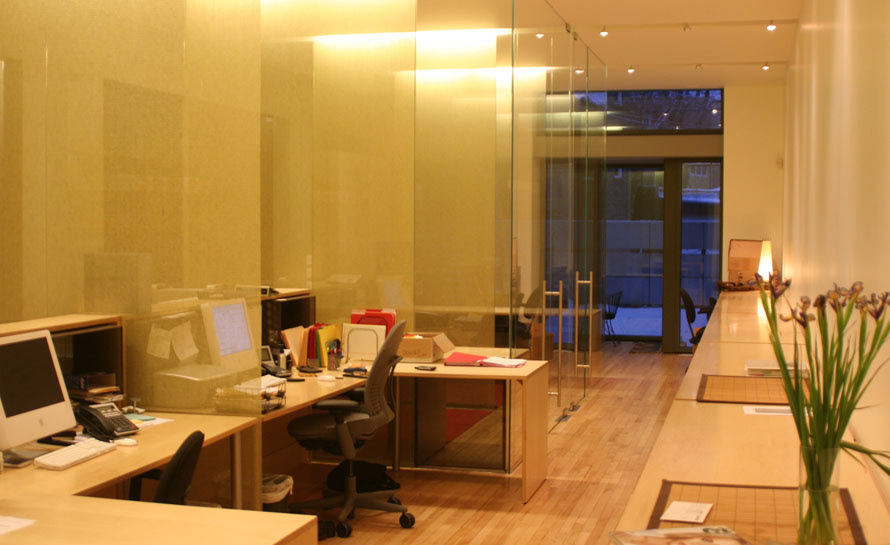 Renovation
June 2006: After nearly two years of planning, the first sledgehammer struck and we began an ambitious gut renovation of our historic building. The goal? Create a light-filled, inspiring new workspace for our company – Studio V Design – and bring back the glory of the building’s famous façade.
Two levels were torn down to their foundations. Walls were replaced by glass, allowing natural light to pour in. Open workspaces were built for collaboration and creativity. The landmarked terra cotta façade was repaired, grouted and cleaned. All this took place while Chicago celebrated the 150th birthyear of the building’s famed architect, Louis Sullivan – and tragically, the same year three of his other Chicago works were destroyed or severely damaged by fire.
Seven months later, we moved in.
↑Back to Top

Insert copy here, which should vary depending on your region. Accept